R Kelly, 54, faces 100 years in prison after he is found GUILTY of all nine counts of sex trafficking and racketeering: R&B star recruited and sexually abused women, girls and boys over three decades – The Sistahship Show

R Kelly, 54, faces 100 years in prison after he is found GUILTY of all nine counts of sex trafficking and racketeering: R&B star recruited and sexually abused women, girls and boys over three decades

Home / News / R Kelly, 54, faces 100 years in prison after he is found GUILTY of all nine counts of sex trafficking and racketeering: R&B star recruited and sexually abused women, girls and boys over three decades

R Kelly, 54, faces 100 years in prison after he is found GUILTY of all nine counts of sex trafficking and racketeering: R&B star recruited and sexually abused women, girls and boys over three decades

R. Kelly was found guilty of all nine counts of racketeering and sex trafficking by a federal jury on Monday during his sex trafficking trial where prosecutors accused the R&B singer of exploiting his stardom over a quarter-century to lure women and underage girls into his orbit for sex.

A jury of seven men and five women reached the verdict after nine hours of deliberation and a six-week long trial featuring lurid testimony.

He faces up to 100 years in prison – 20 years for racketeering, 10 for each of the sex trafficking convictions. Sentencing is expected to take place on May 4, 2022. Kelly has remained in custody after being denied bail in his New York City case in October 2019.

The jury began deliberating federal racketeering and sex trafficking charges against the superstar on Friday in Brooklyn, after prosecutors and defense attorneys finished their closing arguments.

Prosecutors say Robert Sylvester Kelly, 54, ran a Chicago-based criminal enterprise for nearly three decades and that he used to ‘target, groom and exploit girls, boys and women’ for unwanted sex and mental torment.

The witnesses said Kelly subjected them to perverse and sadistic whims when they were underage. He has denied any wrongdoing. 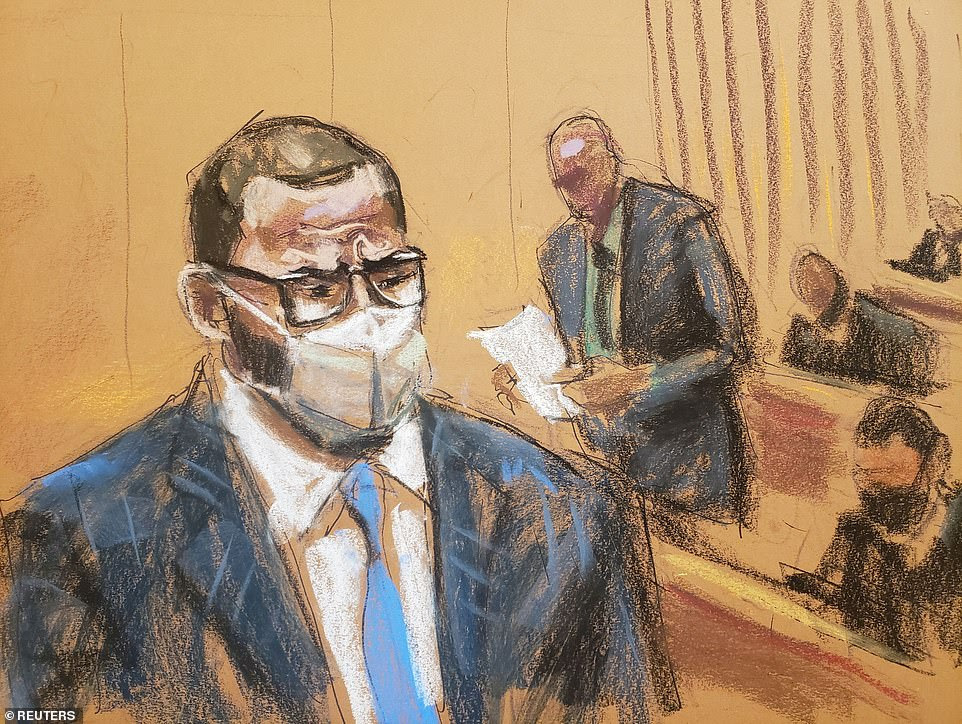 Kelly’s (pictured in court on September 27 as the jury foreman reads the guilty verdict) guilty verdict follows 21 days of evidence including 50 witnesses and hours of searing testimony featuring accusations of rape, druggings, imprisonment and child pornography 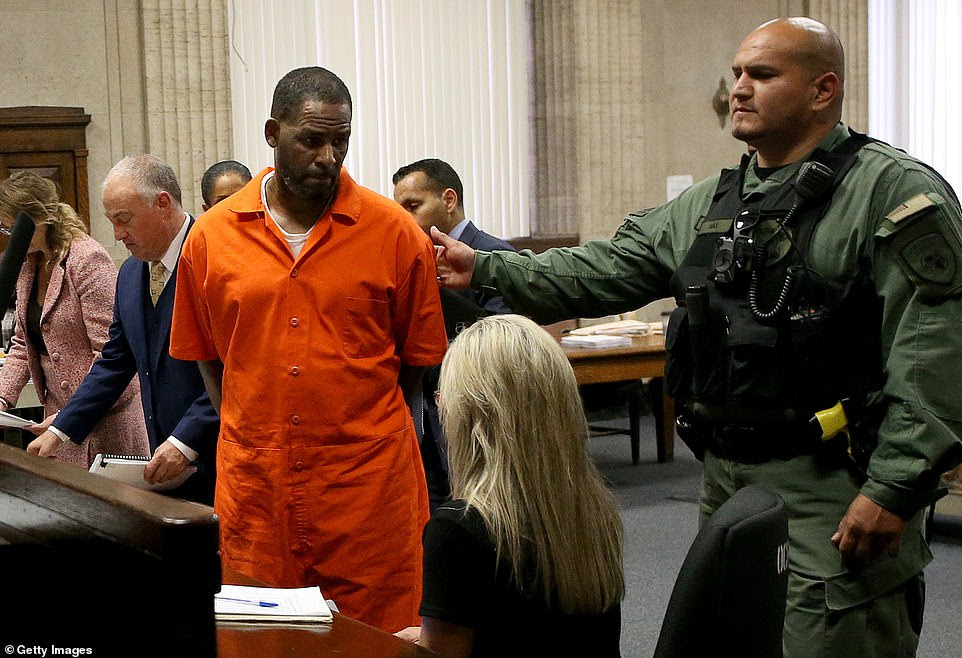 R. Kelly (pictured in 2019) was found guilty of all nine counts of racketeering and sex trafficking by a federal jury on Monday during his sex trafficking trial where prosecutors accused the R&B singer of exploiting his stardom over a quarter-century to lure women and underage girls into his orbit for sex

What was R. Kelly on trial for in New York?

R. Kelly stood trial Brooklyn federal court after he was accused of being the ringleader of a sex ring involving women and underage girls and boys.

The charges were first brought in a five-count superseding indictment in Brooklyn federal court in July 2019.

In March 2020, he was slapped with additional charges upgrading the case to a nine-count indictment.

The charges relate to allegations involving six alleged victims – five women named as Jane Does in the indictment and the singer Aaliyah. These charges are:

ONE COUNT OF RACKETEERING – GUILTY

The racketeering charge includes 14 underlying acts including: one act of bribery, three acts of sexual exploitation of a child, one act of kidnapping, three acts of forced labor and six acts of violating the Mann Act.

Racketeering charges are used where there is an ‘enterprise’, mob or mafia running organized crime operations.

In this case, Kelly is accused of running a racketeering ‘enterprise’ for two decades made up of his ‘inner circle’ of managers, bodyguards and other employees who would help him recruit women, girls and boys for him to sexually exploit and traffic them around the US.

To convict Kelly on the racketeering charge, jurors had to find him guilty of at least two of the 14 acts.

The Mann Act is a federal law that makes it illegal to traffic people across state lines for prostitution or illegal sexual activity.

Four of these charges relate to an incident involving Jane Doe #5 in 2015 while the other four involve Jane Doe #6 in separate incidents in May 2017 and February 2018.

Three of these charges involve Kelly allegedly exposing the two women to herpes without informing them.

‘Today’s guilty verdict forever brands R. Kelly as a predator who used his fame and fortune to prey on the young, the vulnerable and the voiceless for his own sexual gratification,’ Jacquelyn Kasulis, the interim U.S. Attorney for the Eastern District of New York who prosecuted the case, said.

Adding that Kelly is ‘a predator who used his inner circle to ensnare underage girls, and young men and women, for decades in a sordid web of sex abuse, exploitation and humiliation.’

‘I have been practicing law for 47 years. During this time I have pursued many sexual predators who have committed crimes against women and children. Of all the predators I have pursued, Mr. Kelly is the worst,’ she said outside the courthouse.

‘He used the power of his celebrity to recruit vulnerable underage girls for the purpose of sexually abusing them.’

Kelly’s lawyer Deveraux Cannick said he was disappointed by the verdict.

‘I think I’m even more disappointed the government brought the case in the first place given all the inconsistencies,’ Cannick said.

‘I don’t think anybody is ever prepared for an outcome like this.’

Jurors began the day on Monday by sending the judge a note asking for transcripts of testimony by two former Kelly employees and for a legal clarification.

The court also permitted the media – for the first time – to hear audio played for the jury.

In one clip, according to reporter Jason Meisner, Kelly is heard hitting a victim because she was suspected of stealing.

‘Keep your eyes closed. Eyes open? Guess what — we start over,’ Kelly was heard saying, followed by sounds of slapping and crying.

After the assault, the victim was heard crying as she repeats: ‘I’m a stupid b***h daddy, I want you to fix me.’

Kelly allegedly told her that he loved her, supported her and encouraged her to keep repeating the aforementioned words.

‘Without a frown, without an attitude you do what the f*** I say,’ he adds.

Another clip, reportedly from the same encounter, also provided insight to how he treated his victims in the bedroom.

In a string of tweets, reporter Jason Meisner revealed the dialogue shared between Kelly and one of his victims during a sexual encounter

Among splashing and moaning sounds, the victim was heard saying: ‘Ooh there is p*** everywhere’.

‘That wasn’t role play and that wasn’t consensual. You saw it with your own eyes,’ prosecutor Nadia Shihata told the courtroom on Monday.

The guilty verdict follows 21 days of evidence including 50 witnesses and hours of searing testimony.

The charges were based on an argument that the entourage of managers and aides who helped the singer meet girls – and keep them obedient and quiet – amounted to a criminal enterprise.

To convict Kelly on racketeering, which carries a sentence of up to 20 years, jurors had to find him guilty of at least two of 14 ‘predicate acts’ — the crimes elemental to the wider pattern of illegal wrongdoing.

He was also charged with multiple violations of the Mann Act, which makes it illegal to transport anyone across state lines ‘for any immoral purpose.’

Throughout the trial, prosecutors argued that Kelly’s accusers were ‘indoctrinated’ into his world, groomed for sex and kept in line by ‘coercive means of control’ including isolation and cruel disciplinarily measures.

They argued that Kelly, with the help of members of his entourage, used tactics from ‘the predator playbook’ to sexually exploit his victims.Gloria Allred says R. Kelly is ‘the worst predator’ she has pursuedLoaded: 0%Progress: 0%0:00PreviousPlaySkipMuteCurrent Time0:00/Duration Time2:14FullscreenNeed Text 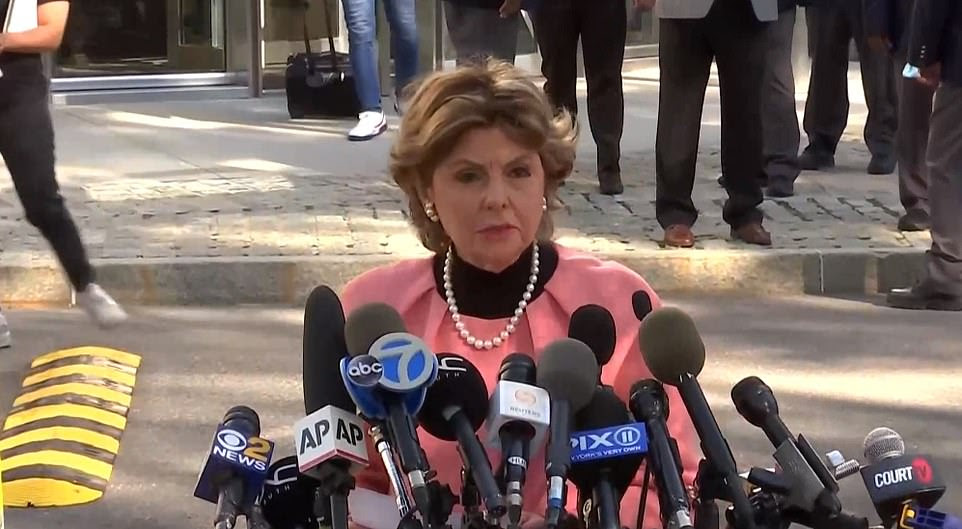 Attorney Gloria Allred addresses the media following R. Kelly’s guilty verdict, calling him the worst sexual predator she has come across in her decades representing victims 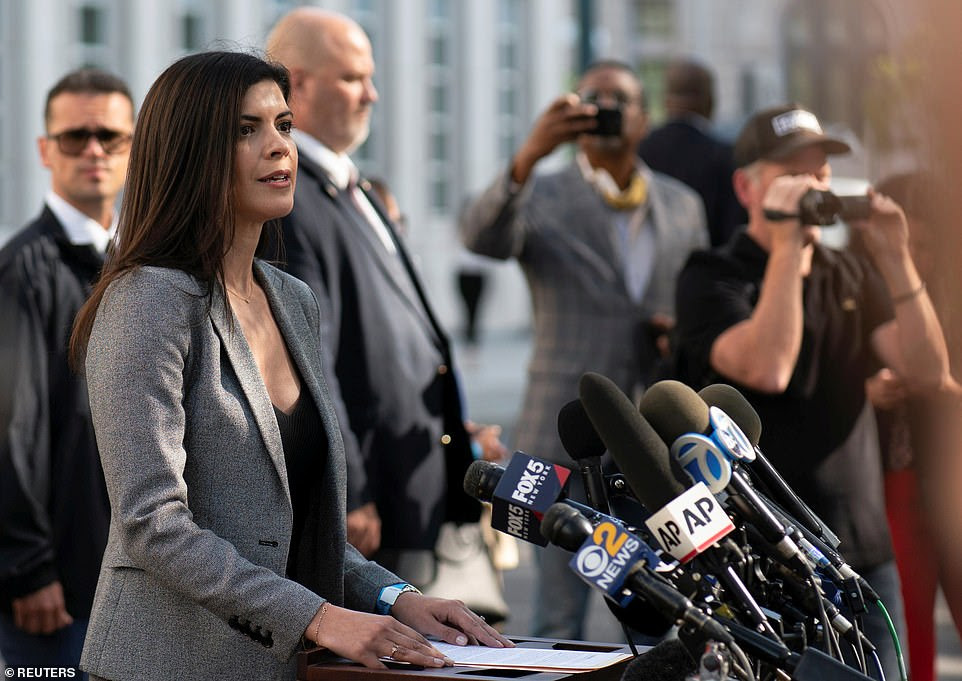 Jacquelyn Kasulis, the interim U.S. Attorney for the Eastern District of New York who prosecuted the case, said the verdict ‘forever brands R. Kelly as a predator, who used his fame and fortune to prey on the young, the vulnerable and the voiceless for his own sexual gratification ‘Prosecutor labels R. Kelly ‘predator,’ applauds strength of victims

‘The defendant set rules, lots of them, and he demanded complete obedience,’ Assistant US Attorney Elizabeth Geddes said during closing statements Wednesday. That meant ‘for many years what happened in the defendant’s world stayed in the defendant´s world. But no longer.’

Many of his accusers shared stories echoing that tone, saying they met the singer at concerts or mall performances, and were handed slips of paper with Kelly’s contact by his entourage.

Several said they were told he could help them achieve careers in the music industry.

The singer did not testify in his own defense during the trial, likely to avoid a damaging cross-examination.

The defense, however, argued that his accusers lied in their testimonies and that Kelly was a ‘sex symbol’ and ‘playboy’ who was being attacked by scorned exes and money-hungry fans.

Defense attorney Deveraux Cannick told the jury there was no evidence Kelly’s accusers were ever forced to do anything against their will.

He also noted that the accusers — also known as Kelly’s girlfriends — maintained a relationship with him because he spoiled them with travel, shopping sprees and five-star dining and other luxuries.

‘He gave them a lavish lifestyle,’ he said. ‘That’s not what a predator is supposed to do.’ 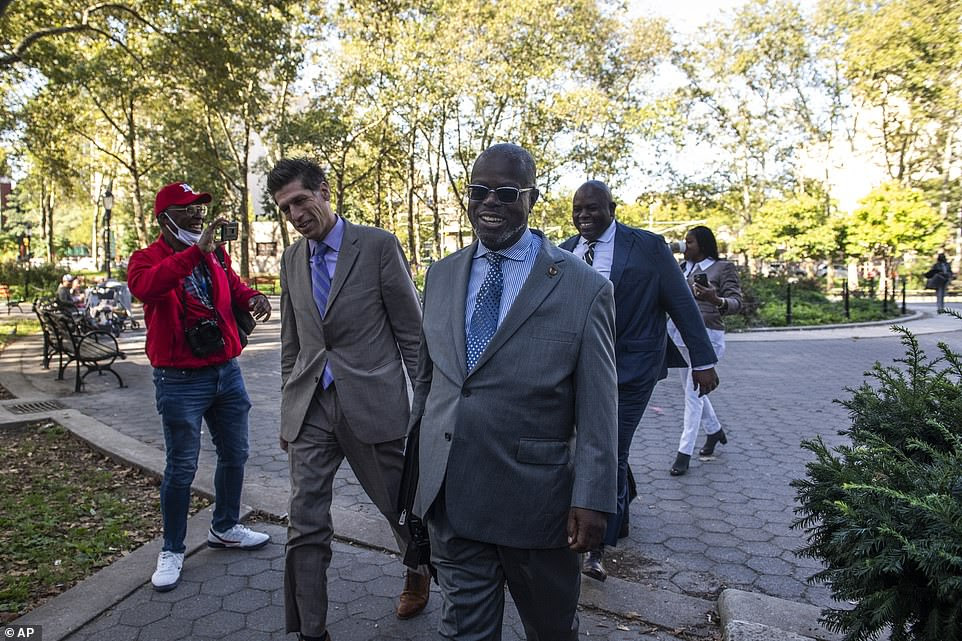 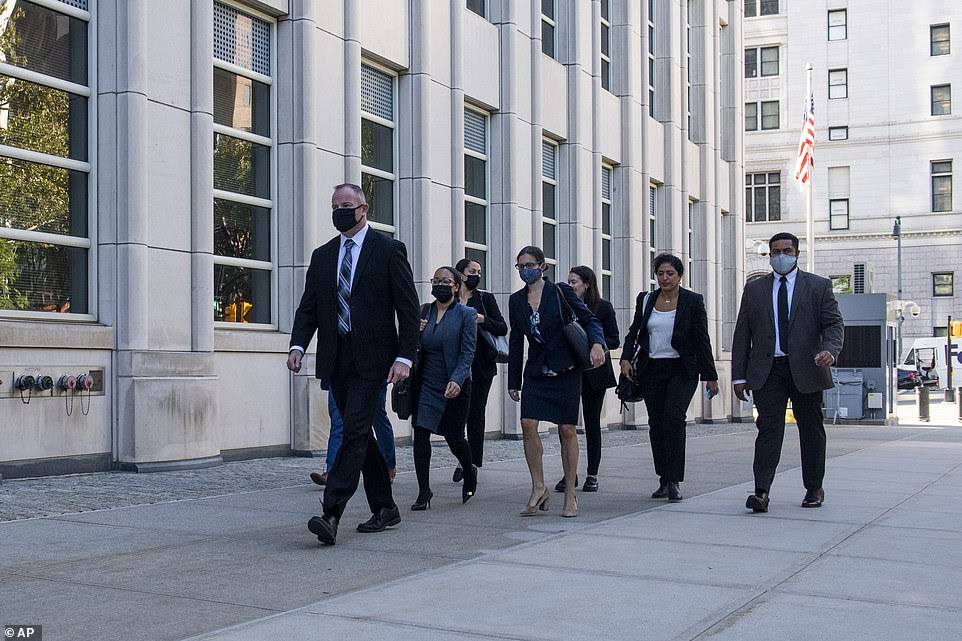 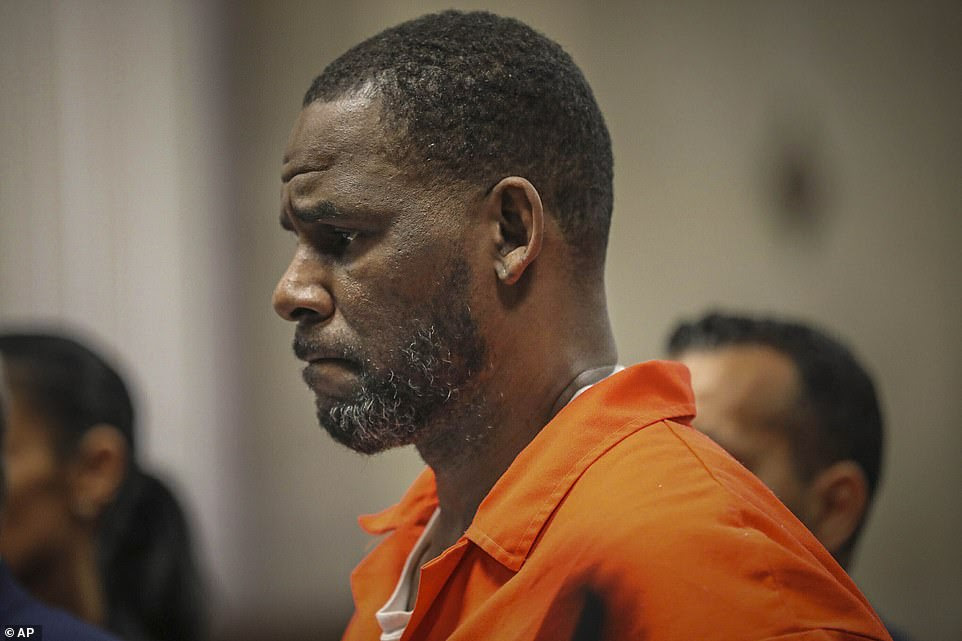